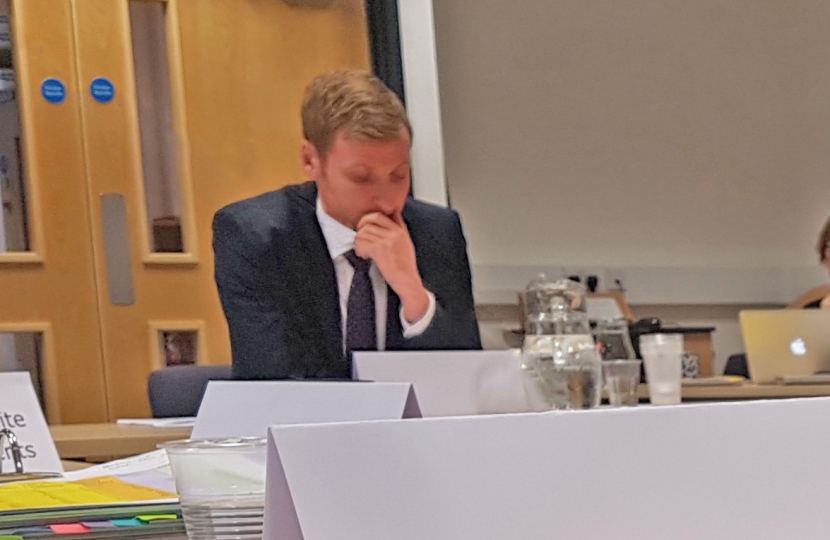 On the final day of its hearings, Lee Rowley MP spoke at the inspection of North East Derbyshire District draft local plan at Mill Lane.

The District Council's plan has been hugely controversial by being both late and proposing nearly 7,000 houses for the District to 2034.  Lee has been active in opposing the current version of the local plan, arguing that the number of proposed houses are too high, that greenbelt is being released unnecessarily and that houses are being built in the wrong place.  Lee made the case for changes to the plan to the independent Government planning inspector who will make the final decision about whether any amendments are required and whether the plan can be considered "sound".

"North East Derbyshire District Council have failed local residents for years on planning," says Lee.  "That's why we have speculative planning applications appearing across the south of the District and why the number of houses being planned to 2034 are too high.  I wanted to make the case to the Inspector today and I hope they will listen.  Whatever happens, I will continue to fight against inappropriate house building in our part of the world and for a Council that takes its responsibilities more seriously than NEDDC have done in recent years."

Lee Rowley has been re-elected as the Member of Parliament for North East Derbyshire after an election night where the Conservatives secured a majority in Westminster.