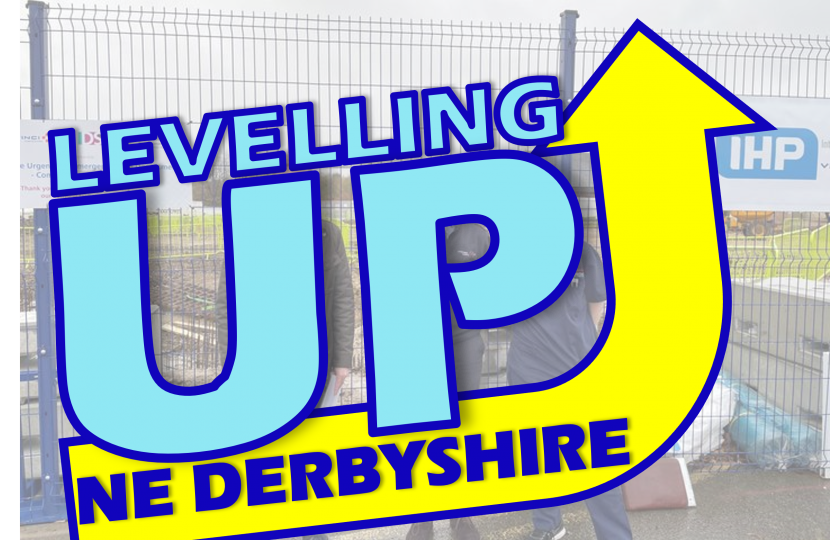 Ever since I became your MP in 2017, I have made it a priority to fight for a fair share for North East Derbyshire - and to make sure that we make progress on improving our local infrastructure.

We have known for decades that we needed improvements in our area - whether to our roads, our schools, our local health facilities or everything else.  The failure to plan, and win funding, by our old Councils over several decades has meant that North Derbyshire is way behind where it should be in infrastructure.

With that in mind, I have made it a mission to try to work to improve our infrastructure - along with our current District and County Councils who are also up for doing the same.  We think there is a real opportunity to show how, working together, we can make a real difference for our area for the long-term.

WON ALREADY!  REAL WINS WHICH RESIDENTS WILL SEE TRANSFORM OUR AREA IN THE COMING YEARS

And, in the last couple of years alone, we have made huge progress in winning funding to improve North East Derbyshire:

MAKING GOOD PROGRESS!  OPPORTUNITIES WHICH WE ARE SEEKING TO TAKE

At the same time, we are also actively seeking other opportunities to improve our area, too:

I'm also continuing to work with our local District, County and Parish Councils on regeneration options for Dronfield, Killamarsh and Eckington, plus a number of other early stage ideas about how we make our area better for the long-term.

Getting our infrastructure into a better place is going to take decades - but I hope we shown some real progress in the last four years and a real determination to try to move things on.  From working elsewhere in the country before I became an MP, the secret has been to have ideas and be ready to put forward proposals as and when opportunities open up.  That's why we've got to keep pushing on all ideas we think might have merit - we won't win them all but, over time, we might be able to deliver some of them - we've got to be in it to win it!

Working with our local Councils, we will keep trying to level up North East Derbyshire in the years ahead.  We've made huge progress in winning the Town Deals, the school and the funding to improve the Royal - the focus is now on delivering all of these successfully and looking at what else we might be able to achieve in the years ahead!